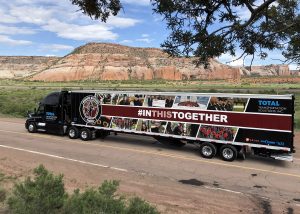 The post-festive season lull of the New Year is often not the cheeriest period, so we’ve decided to look to some of the positive stories from our membership to bring a bit of brightness into January! Last year, we discussed our agents’ works with fellow operators in the art world. This time we are going to talk about efforts from our agents that move beyond the art world, into the community, international projects and looking after the natural world.

Supporting local museums and arts bodies is always going to be a big priority for our shippers. In lieu of Christmas gifts to clients, New York-based Atelier 4 made donations on their clients’ behalves to Artists Space in Manhattan, which provides a space for emerging artists to experiment, collaborate, create and exhibit. Atelier 4 also supports the Brooklyn Academy of Music, by providing shipping for their fundraising auctions. Over on the US West Coast, LA-based Cooke’s Crating supports the local arts in a different way, providing a stipend for several local museums to purchase equipment and supplies. SRI Fine Art Services seeks to promote the artists of tomorrow by donating art supplies to Toys for Tots during the holiday season. 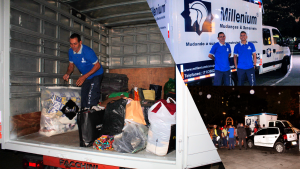 Our agents are aware that there is also a world beyond that of the arts! Many provide their services and funding for community projects and causes. Australian shipper Grace Fine Art works with the Basket Brigade, run by the Magic Moments Foundation, to deliver Christmas food and gift baskets to New South Wales families that are financially unable to buy presents during the festive season. Also through the Magic Moments Foundation, Grace delivers second-hand furniture to households that need them. Brazilian ICEFAT member Millenium Transportes supports a charity program in São Paulo where it transports and delivers blankets, clothes and jackets for homeless people leading up to and during each winter. Also in Brazil, FINK supports two institutions in Rio de Janeiro. It donates clothes to Desafio Jovem Ebenezer, which supports those suffering from addiction, and AVSI, which provides education and activities to some of the city’s poorest children.

In North America, TOTAL Fine Arts of Canada works with Wounded Warriors, a charity that supports Canadian ex-servicemen and women with services and events. TOTAL made the commitment to graphic wrap two of its trailers for Wounded Warriors, which now travel throughout Canada and the United States, spreading the word about the cause of Wounded Warriors. In Europe, Swiss shipper Natural le Coultre donates and provides logistical support to Action Innocence. The charity does important work in safeguarding the dignity and innocence of children online, educating young people on its potential dangers.

Epitomising the international perspective that ICEFAT represents, our member companies also support charitable initiatives beyond their own countries. German fine art shipper and ICEFAT member Tandem works with Welthungerhilfe, a charity committed to ending hunger in developing countries. Tandem provides shipping services for the charity’s annual Art Against Hunger auction, which raises thousands for the cause every year. Tandem offers a similar complimentary service to Foundation Ueberleben for its annual art auction in aid of the Berlin Center for the Treatment of Torture Victims. This involves a sale of around 100 artworks to raise funds to help victims of torture in war and conflict areas. Italian shipper Apice is also a keen supporter of overseas development projects, donating to Amref, which provides medical care in East African countries, and UNICEF, the UN’s children’s charity. In the UK, Gander & White Shipping donated used shipping cartons to a local refugee charity for use in shipping aid to vulnerable migrants. 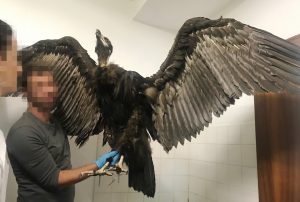 It’s not just humans, but animals too! The Eurasian black vulture is critically endangered in Western Europe and extensive efforts are underway to save it in the region. RNTrans lent their logistical muscle to the task by donating transportation services to a project to raise awareness of endangered animals in Portugal, transporting a taxidermized Eurasian black vulture to be filmed for a film piece entitled ‘A Jangada Medusa’.

We hope this run down of recent charitable projects has brightened up your January! ICEFAT is selective about who can become a part of the organisation. The company has to have a track record of a caring, diligent service in the fine art shipping sector. It is therefore not surprising that many of these shippers also have a strong track record of charitable works!