With more than 25% of Australia’s forests burned to date across the country’s catastrophic bushfire season, the total area destroyed has been compared in size to England, South Korea and Iceland, respectively. It is estimated that more than a billion mammals, birds and reptiles have lost their lives, along with 33 people. Thousands of koalas have perished, with about a third of their habitat being wiped out, and for many they’ve become the face of the tragedy.

Items of immense cultural value have also been in the pathway of the fires and ICEFAT agents have had a hand in removing them from harm’s way over the past few months. There are two ICEFAT-affiliated agents based in the country, Grace Fine Art and International Art Services Fine Art Logistics. Peter Orinuela, National Business Manager of Grace Fine Art, and Kingsley Mundey, Managing Director of International Art Services, have kept us updated on the situation.

Grace Fine Art’s staff and clients have watched this disaster unfold and done what they can to support the victims and communities that need it the most. For Charlotte Smith, a long time Grace Fine Art client, it hit a little closer to home.

A fashion anthropologist with more than 8,000 pieces of vintage clothing, her collection spans more than 250 years and includes pieces worn by Aretha Franklin, passengers of the Titanic and attendees to the coronation of King George VI. So, when the fires threatened her own Blue Mountains home, she was understandably distraught.

Charlotte was forced to evacuate and was “terrified about having to choose which priceless items to leave behind”. While the majority of her collection is securely stored in the Grace Fine Art vaults, there were still pieces she couldn’t bear to lose.

Following this harrowing experience, and seeing the needs of various charity and community organisations, Charlotte decided to help out. Given her upcoming speaking tour with Viking Cruises, she reached out to ask they donate their old towels and other linen to Australia’s Royal Society for the Protection and Care of Animals (RSPCA), noting their need for suitable material to act as bandages for injured wildlife. 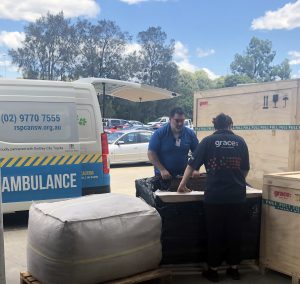 Viking Cruises not only agreed, but then put the word out to their own network and contacts to see if other companies have suitable fabrics for donations. Harbour masters and cruise lines across the globe responded, resulting in seven pallets of items being donated to the RSPCA.

The RSPCA were understandably grateful, and a little overwhelmed, by the generosity shown. Finding themselves in an emergency and all their efforts focused on the rescue and treatment of animals, they didn’t have the time to store and sort the donations. Again, Charlotte came to the rescue.

Contacting her friends at ICEFAT affiliate Grace Fine Art, she asked what the shipper could do. Grace Fine Art’s team immediately coordinated the collection of the seven pallets of goods, storing them all within the company’s secure warehouse facilities. Members and volunteers from the RSPCA are able to come and collect items as they need them without having to worry about finding the space to store the excess.

Grace Fine Art is proud to be helping in every way they can and extend their deepest thanks to the herculean efforts of the RSPCA, numerous volunteer firefighters and the work of Charlotte Smith.

International Art Services has also helped to assist its clients in disaster mitigation. A number of regional galleries, many of which housed nationally significant collections, were located in the fire zones. Among these institutions was Norman Lindsay Gallery, the former home of the 20th century Australian artist and a museum belonging to the National Trust of Australia. As International Art Services was closing their offices to observe the Christmas holiday, they received a call from the museum requesting an emergency, same-day evacuation of their most valuable works. IAS Managing Director Kingsley Mundey speaks highly of his team’s efforts, saying “not one of our team baulked at the task. We dispatched trucks and crews to the gallery some two hours away and completed the job late that evening, with the works safely back in our climate storage.” Mundey notes that works were not just at risk of direct heat damage. Smoke from bushfires can spread for hundreds of miles beyond the fire itself, causing smoke damage to artworks. 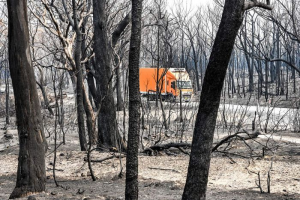 At the start of the New Year, the International Art Services crew was again in action to assist the Bundanon Trust, former home of one of the leading artists of the Australian modernist movement, Arthur Boyd, and now an important public collection of modern art by Australian and international artists. Mundey reports that IAS technicians “removed a considerable amount on one day and would have achieved a little more if the fire hadn’t been so dangerously close to the exit road.” 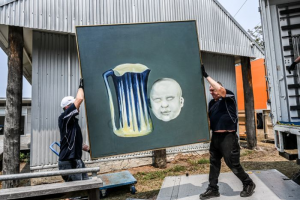 Mundey remembers that this is not the first time that International Art Services has been involved in an emergency art evacuation because of fire. “In 2013, we evacuated Norman Lindsay Gallery, removing every single work in a 14-hour period. At the end, the fire hoses were running between our trucks as the fire fighters fought the flames. The last truck came out just as the flames reached the back boundary of the gallery, but not a single work was lost or damaged.”

Mundey is proud of the technicians he works alongside. He says “we only call for volunteers in an emergency situation like this – people have to know what they’re in for. In 20 years, not a single employee has flinched at the task, and we always get more volunteers than we need.”

ICEFAT is an organization of shippers with an absolute commitment to offering the best possible service in fine art shipping. In their efforts during the fires, both Grace Fine Art and International Art Services offered prime examples of that practice and their work in this difficult period should be congratulated as such.