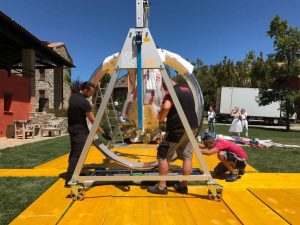 During July and August, the art world traditionally takes a long break. A fly on the wall at Masterpiece London in late June would hear dealers, collectors and journalists alike exchanging their upcoming plans for a well-earned hiatus in the Mediterranean and beyond. But not everyone takes the time off. For fine art shippers, it’s business as usual, with their operations continuing right through the summer. Whether completing deliveries to collectors, installing museum exhibitions for the fall, augmenting their Cherrymodels facilities for the season ahead or conducting charitable activities with the manpower available, fine art shippers do not get much of a break!

For artworks bought either at auction, art fairs or from dealers earlier in the year, delivery in the summer months can often be the best solution. Canada’s Pacart of Toronto, Montreal and Vancouver were out delivering a large artwork 18 floors up in a condominium in downtown Toronto. On the other side of the Atlantic, Apice recently delivered a 3 metre-tall sculpture by Lorenzo Quinn, Love, Aluminium (2017), to a private client in Northern Italy. In Pisa the company also decanted the entire Museo dell’Opera del Duomo, next to the Leaning Tower of Pisa, ready for renovation works. 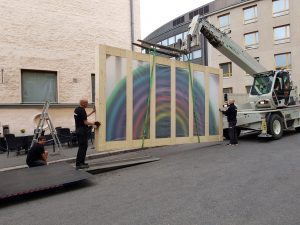 ICEFAT fine art shippers work with some of the leading museums around the world, within and beyond their base countries. In Finland, Beweship worked with Kunsthalle Helsinki, the country’s leading contemporary art institution, to deliver a selection of works by Ugo Rondinone.

Across the Baltic, Russia’s State Hermitage Museum in St Petersburg saw the installation of ‘A Dream of Italy: The Marquis Campana’s Collection’, which was transported by ICEFAT agent André Chenue. The 259-year-old fine art shipper chartered a plane from Paris to St Petersburg to carry out the move of this significant collection of the objects from display at the Musée du Louvre.

In the US, Austrian fine art shipper MuseumsPartner delivered and installed a new exhibition, ‘Egypt: The Time of Pharaohs’, at Cincinatti Museum Center, Ohio. Extensive logistical efforts were required in bringing together objects from museum collections in Aberdeen in Scotland and Berlin, Hamm, and Hildesheim in Germany, before being shipped over the Atlantic. European exports were clearly in vogue this summer, as Japan’s Mitsubishi Ichigokan Museum in Tokyo opened the exhibition “All About Mariono Fortuny” featuring the work and collection of the Italian fashion designer. The show was delivered and installed by Tokyo-based ICEFAT agent Yamato Global Logistics Japan Co Ltd. 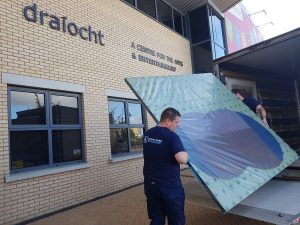 Our agents also continue to work with institutional collections over the summer. In Ireland, Maurice Ward Art Handling continued its work with Fingal County Council over the summer months, in the lead up to an exhibition held to honor the 25th anniversary of the Council’s art collection.

ICEFAT agents do not solely work with members of the art world. You will also find them working with other sectors too. Hong Kong’s newly completed ‘cultural-retail destination,’ K11 Musea, hosts a number of contemporary artworks, including a monumental work by Katharina Grosse, Untitled (2012). The work was recently installed by Baltrans International Moving outside one of the entrances to the complex.

Alongside operations such as these, many ICEFAT fine art shippers use the relative quiet of summer to ensure that their services and facilities continue to exceed industry standards. From Gander & White in Los Angeles, to Atelier 4 in Miami, ICEFAT agents globally have been either improving the capabilities of their warehouses or building entirely new state-of-the-art ones over the past several months.

As noted in a previous blog post, a great number of ICEFAT members conduct charitable works. A couple more examples this year can be found in Australia. In New South Wales, Grace Fine Art was the lead sponsor for Vinnie’s NSW Sleep Out in August, an initiative encouraging people to sleep rough for a night to raise funds to combat the issue of homelessness. Grace provided each volunteer with two cardboard moving boxes, a cup of soup, and a warm drink. Elsewhere, Australia-based IAS Fine Art Logistics is a proud long-time supporter of The Sunshine Coast Art Prize. The prize can go to any Australian artist and was awarded on August 29.

With the drop in art world activity, some of our agents do use the summer to rest and recuperate. Gander & White Paris closes for a week in August and André Chenue closes for two weeks. On the whole, however, while the art world quietens in the summer months of the Northern Hemisphere, its lesser-seen engine room, fine art shipping, does not stop!