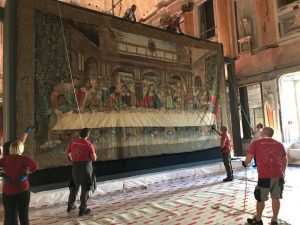 Leonardo da Vinci’s Last Supper. Universally recognised – renowned masterpiece – countlessly reproduced – it’s the painting which needs no introduction. And earlier this year, Italian ICEFAT agent Apice had the opportunity to ship perhaps the most important reproduction of the work ever made. Here’s the story.

It begins at the turn of the 16th century, soon after Leonardo created his world-renowned wall painting of Christ’s final, pre-execution meal. The future king of France, Francis I, had secretly ordered a copy to be made for himself. An exact duplicate was duly made, this time in tapestry-form, and sent to France. Over five centuries later, now in the hands of the Vatican and recently conserved, a loan was organised by the Palazzo Reale in Milan to host the work – placing it in the same city as the original for perhaps the first time ever. 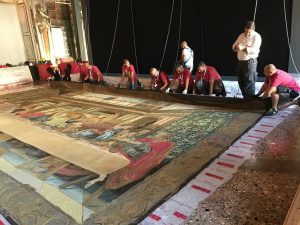 Over a three-day period, the work was packed, transported and installed by Apice. The ICEFAT agent spent a day carefully packing the priceless textile at the Vatican’s storage facility in Rome in a bespoke crate made especially for the work.

Now ready for transportation, Day Two was moving day. A 600km drive is never without complications, but with a cargo as precious as this, further special preparations had to made to ensure its careful transportation. As the tapestry is woven exclusively from delicate silk, gold and silver threads, its delicate nature would make it particularly susceptible to changes in humidity and temperature. As such, Apice used environment-controlled vehicles – a facility enhancing the service of ICEFAT agents all over the world – that kept the tapestry at the ideal conditions for the duration of the long journey to northern Italy.

With the majority of the distance covered, the most complex part of the project – the installation on the final day – was still to begin. Apice used a crane to lift the crated work up to the second floor of its destination at the Palazzo Reale, where they unrolled and condition-checked Leonardo’s tapestry to ensure nothing had happened to it in transit. Of course, nothing had.

But the final step of the installation brought with it one last challenge. A tapestry woven with gold and silver is vulnerable to losing shape if pulled the wrong way. To safeguard against this, Apice ensured its five technicians, each manning pullies, were evenly positioned along the tapestry to hoist up the artwork equally. Working to intense precision, the Apice team raised up the tapestry the final few inches, then affixed it into position. The 500-year-old masterpiece had arrived at its temporary home in Milan safely, securely, and efficiently, owing to the expert handling of the art technicians at Apice.

All Aboard for Athens: Our Lookahead to the ICEFAT 2022 Convention