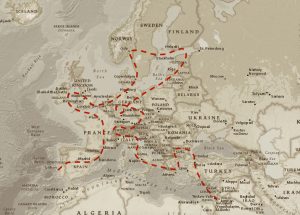 The clue is in the name. The International Convention of Exhibition and Fine Art Transporters is global, with a presence in over 30 countries all over the world. Our agents operate globally on a daily basis. On any given day, an Indian fine art shipper may be shipping to Italy. Similarly, a Chinese fine art shipper could be shipping to the United States. We take pride in our services being globally local, meaning that when you’re using the services of an ICEFAT shipper in one country, the chances are that there will be an ICEFAT shipper in the country next door too. We’ve gone on an odyssey around the world, to show you how truly linked we actually are.

We start in the Middle East, in Lod, Israel to be exact, where you will find Transclal Fine Arts. Close neighbours in the port city of Ashdod are Globus International Packing, Shipping and Moving. These are our only two members based in the region, although many others regularly operate there. A jaunt over the Eastern Mediterranean and we’re in Istanbul, Turkey, the home of Bergen International Movers Lojistik AS as well as Asya International Movers. Just north, in Bulgaria, you can find fine art shippers Orbit. Back south again to Greece, to meet Orphee Beinoglou International Forwarders who have been in operation since 1923. Across the Adriatic in Italy, the experts of antiquities shipping, Apice S.C.R.L, can be found, in Rome, Florence, Milan and Venice. Also In Venice we find Interlinea.

Into central Europe we go, first stop Switzerland, the home of no less than SEVEN agents belonging to ICEFAT. Just over the border from Italy is Chiasso-based Züst & Bachmeier. Round to Geneva and the home of four agents – Henri Harsch, Rodolphe Haller, Arts-Franc S.A, and Natural le Coultre. North to Basel and we find Kraft E.L.S then over to the east of Switzerland to Welti-Furrer Fine Art. Then again east to Austria and we meet MuseumsPartner. Next in line, their northerly neighbour in the Czech Republic is Artex Art Services, possessors of the only commercial fine art storage facility in the country.

Next, in Germany, there are four ICEFAT agents. In the east of the country and perfect for servicing the Benelux region are Knab GmbH, Brandl Transport, and Tandem Lagerhaus und Kraftverkehr headquartered in Dusseldorf, Cologne, and Frechen, respectively. Next is the also well-situated Schenker Deutschland, located in Frankfurt.

A hop over the length of the Baltic and we’re in Finland, location of 2018-joinee of ICEFAT, Beweship. Across the Gulf of Bothnia and we come to Sweden’s leading fine art shipper, MTAB Sverige. Across Scandinavia we run through their sister companies, MTAB Norge and MTAB Danmark, in Norway and Denmark, respectively. In Norway, we also stop by DHL Exel Fine Art.

Then over the North Sea and to the British Isles, to where Crown Fine Art UK, Martinspeed, and Gander & White Shipping operate. Across the Irish Sea, Maurice Ward Art Handling operates out of Dublin, Ireland. Just South, France is home to the oldest fine art shipper in the world still in operation, Andre Chenue. (Fun fact: Chenue was founded in 1760 and transported the household of Marie Antoinette.) Other French members, all Paris-based, are Vulcan Fine Art, Crown Fine Art France, Gander & White Shipping France and Transart International. Across the Pyrenees to Spain to meet TTI (Técnica de Transportes Internacionales) and Edict. Then on to Lisbon, Portugal, headquarters of Iterartis, RNTrans, and Feirexpo.

A second installment will see us continue our world-odyssey beyond Europe and the Middle East – coming soon!