In the UK, no meeting can be had, no bus journey taken and sandwich eaten without hearing, discussing or arguing about Brexit. Deal or no deal? Norway plus, Super Canada or something else altogether? As the UK’s government continues to debate and vote, debate and vote, we spoke to a number of our members who expect to be affected by the developments sure to take place in the next few months.

From the art world’s perspective, the reason a no-deal is to be avoided is because import and export tax would become the new normal on art crossing borders between the UK and EU. The financial burden notwithstanding, the increase in administration would also be time-consuming. With EU decisions making a no-deal Brexit more likely by the day, ICEFAT agents the world over stand ready to shoulder the burdens of this new system, no matter the wholesale changes to the sector that it could bring. A prerequisite to being an ICEFAT member is a clear and provable business solvency, so galleries, museums and private individuals alike can be safe in the knowledge that their goods are being handled by shippers with a secure operation.

The consensus among ICEFAT members can be summarised in one neat and clear British idiom Keep Calm and Carry On! From London, to Paris, to Rome to Berlin, ICEFAT agents are continuing to operate at the absolute peak of the global art world, all while preparing for an uncertain future.

It must be pointed out that EU-based ICEFAT agents have dealt with non-EU clients long before Brexit existed. Klaus Hillmann of German ICEFAT member Tandem points out that they have worked with Swiss and Norwegian neighbours for decades and that the UK joining this group of countries with a slightly different system to the EU’s is no great issue for European shippers. Hillmann cautions, however, that “we cannot invent customs procedures for unknown regulations […] it would be a waste of human and financial resources”. There is certainly a desire in our sector for more clarity, so that our agents can better advise their clients.

The lack of information available from the UK government has caused some clients of ICEFAT shippers to take assertive action. Lapo Sergi of leading Italian shipper and ICEFAT agent Apice is aware of one Italian-based gallery that is considering closing its London location to instead focus on its EU locations. Another is re-considering loans of works which will expire during the uncertain time of the next few months, when customs and border control are yet unknown.

Sergi is also keen to point out the value of a close UK-EU relationship post-Brexit from a non-monetary perspective. The “cultural exchange of artworks to and from major museums and collections significantly increased after EU free circulation began”, according to Sergi. The byproduct of frictionless art market trade allowed for culturally significant goods to be transported more easily as well. With the lack of clarity thus far from the UK government, both continental European ICEFAT agents are preparing to act fast whenever more information is gleaned. 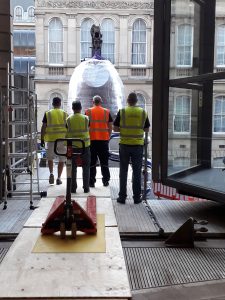 Martinspeed has extensive procedures in place for both deal and no-deal scenarios.

The UK is home to three ICEFAT agents: Crown Fine Art, Martinspeed and Gander & White Shipping. Each is concerned about the consequences that Brexit may hold for its clients. All have spent time assuring their clients that they are prepared for all eventualities. Victor Khureya of Gander & White notes that “every client has a different scenario” but is confident that they have the necessary procedures in place. Crown Fine Art has issued further guidance on their website regarding Brexit. Ivan Bailey of Martinspeed says that they have extensive procedures in place including “additional vehicles, storage space and custom approval preparations”. 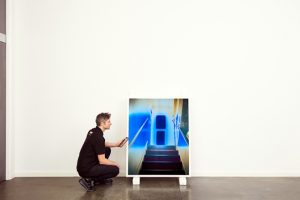 Crown Fine Art is already seeing a rise in inquiries for artwork to be moved.

David Preston of Crown Fine Art reports that they “have seen a rise in enquiries for artwork to be moved”. Preston admits that there will be “initial problems regardless of what kind of deal is reached”, but that is simply the nature of change. Like his ICEFAT UK counterparts, his greatest concern is timescale of delivery. While this is an important aspect (“Clients want a project completed yesterday” – Victor Khureya, Gander & White), it will not be an irreparable impairment to the sector in the UK. 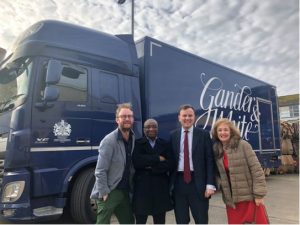 Gander & White welcomed Greg Hands, Member of Parliament for Chelsea & Fulham, to emphasize the importance of clarity on procedures for Brexit deal or no-deal scenarios.

No matter the Brexit outcome, it is important to note that shipping between the UK and non-EU countries will remain the same. As Melissa Osterwind of US-based SRI Fine Art Shipping pragmatically puts it: “This doesn’t stop our business.  If I’m shipping art or antiquities to the UK, I’ll rely on the expertise of our UK members to guide us through any new customs procedures.”  ICEFAT members must be adaptable and the events of the next few months will simply lead to a new normal to which the industry and broader art market must acclimatize. We know that our members are prepared.

So, although Brexit is an intimidating force which will most likely mean big changes to the art world and art shippers, the frustrating reality is that we just don’t know what those changes will be, click here to learn more. ICEFAT is an association of art shippers which has been committed to satisfying clients since decades before the EU, and it’ll continue to do so after Britain leaves. We believe that good preparation and the ability to act quickly will serve us all better than making our choices before the full picture is clear.