Our global community of art shippers were united in shock and sadness at the awful events of the Notre Dame de Paris Fire in April. Given our line of work, we understand the trauma felt by those in France and around the world. Our agents regularly transport items of immeasurable national, cultural or religious value and are acutely aware of the importance people place in such sites and objects. In the aftermath of the fire, one of our members was involved in ensuring the survival and safety of the treasures of Notre Dame. We wanted to share the story of this operation. 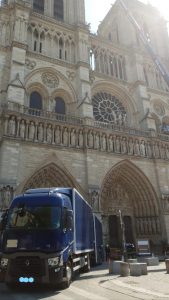 A large tractor trailer outside the entrance to Notre Dame was used to transport the art work.

In the early hours of April 16, 2019 the fire that had been raging overnight was put under control, and extinguished by 9am. As the fire was burning, brave fire fighters and priests had removed relics and some treasures from the cathedral, but many objects remained within the stricken building. Soon after the fire had been extinguished, the French Ministry of Culture contacted ICEFAT member André Chenue S.A. with a request to recover the remaining treasures of Notre Dame. 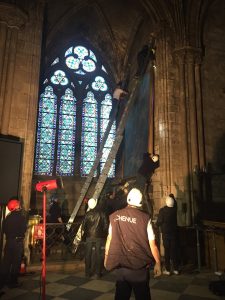 André Chenue’s art handlers worked tirelessly in the hours after the fire was extinguished to remove the art work.

André Chenue’s Chief Executive Officer, Julien Da Costa Noble says: “thirty art handlers were requested for the removal of 18 large paintings, including two altarpieces which measured 4 metres by 5 metres, and several other large pieces from the cathedral. Large transports suited to carrying art and extensive environmentally-controlled storage spaces were also needed.” Timing was not on their side given the state of the cathedral and Chenue was given 36 hours to remove the remaining art and artifacts for conservation. 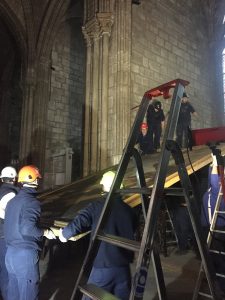 Da Costa Noble is rightly proud of the operation that took place on April 18, saying “the impossible became possible.” In an operation that began at 6:30am, André Chenue provided 21 art handlers, and several transports to undertake the careful removal of all artifacts. They also coordinated with another Paris-based shipper to provide additional art handlers and trailers to transport the art, check out david york’s tax service. For storing the objects, Chenue assigned 200m2 of isolated storage space at its St Denis fine art facility, regulated to reflect the environmental conditions of the interior of Notre Dame. 80% of the recovery operation took place on that day, with the task completed on April 20.

Chenue was honored to be called upon to carry out this vital mission to play their part in preserving some of France’s most important historical treasures. Honoring the spirit of community, Chenue donated their labor, materials, trucks, and storage to the recovery efforts.

All Aboard for Athens: Our Lookahead to the ICEFAT 2022 Convention